Reunited as Dignitas, good-old Ninjas in Pyjamas and Håkon “hallzerk” Fjærli under the guidance of Fifflaren, surely, deserve a heavy dose of our attention.

Though guys young as a team, they have already qualified for Europe Rio Minor Closed qualifier. That was impressive, but we will take a deeper look at how Dignitas play Inferno.

Spoiler: they are more than vulnerable.

For first-ever games as Dignitas this year, they made a focus on 2 maps: Inferno and Nuke. It’s logical due to the fact that even the first Rio Minor Europe Open qualifier was played on the new patch. Dignitas is a recently formed team, so the applied patch could become a nightmare for them. Luckily, it went another way.

The Scandinavians won all the five Inferno they have played, but they still have a few moments their opponents can use to crush Dignitas.

More than 70% of gun rounds start for Dignitas with early aggression of A-lurker in apartments. Usually, it's GeT_RiGhT. The way he moves in the first 20-30 seconds of the round is very profitable for Dignitas. But also it's very risky.

Usually, Christopher impudently goes straight into A-apps, and moves around there for a while. Hence, lurker collects a lot of information, has an opportunity to make an opening kill on A-apps/boiler player and to cut off the mid aggression by the defense.
But if we take into account the fact that Dignitas prefer to let CTs control banana in half of the gun rounds and the distance between GeT_RiGhT and his teammates, here comes the other side of the coin.

CT-side has a decent reason to displace the priority from B to A, playing 3-4A aggressive apps setups. With baits and grenades, CTs may confuse a lurker and to start the round with an opening kill.
In addition, A-apps are almost never without a lutker even 2 rounds in a row, so it's possible to pick off him multiple times per half (2 rounds of aggression - 1-2 passive default rounds - 2 rounds of aggression).

It's even more important to kill A-apps lurker due to the fact that Dignitas almost always leave their lurker deep behind, while executing a site. It's often unexpected and prevents a retake.

Concluding all the past matches, there are 2 ways how Dignitas usually behave in case of banana:
•  Dignitas spend no grenades on banana or throw the only molly  at 1:44 to car (and sometimes smoke on middle of banana) – that means they won't fight for banana;

It's a default moment, but if you see no nade or the only molly at 1:44, banana is probably free-to-take.

Absence of fake playing the first gun round

If you say something like "I know the team that fake a lot on Inferno" and don't mention Dignitas, you have never seen those Swedes in action on Inferno then.

In more than half of rounds Dignitas faking execute hard in the mid-round to create holes in the defence and rotate back as soon as possible.

But there's the rule: all matches Dignitas have played on Inferno they have never pretended to fake in the first gun round.

Yeah, even they have played this way more than 5 times in a row, it doesn't give you a guarantee, but a high probability of such scenario exists. Also it seem to be the habit, maybe a mental shade - "Okay, guys, it's first gun round, it's important for us to win it, no additional risk and no jokes now".

When Dignitas play as CT, they almost never use gambling 4A/4B setups, prefer to rely on 3A+2B & 2A+3B default setups.

Dignitas' A-anchors behave two ways in case of A-apps: they often leave apps totally without a control or a player check the apps and goes back to more safe position after 1:35-1:30.

It means that apps are free-to-take almost every single round after 1:30 – it's not something extremely critical, but Dignitas offer terrorist an additional map control.

Bonus: f0rest's lovely position is on the edge of balcony and he might be easily caught a couple of times.

An interesting fact: in my eyes, Dignitas don't pay enough attention at arch playing both CT and T sides.
• As T, Dignitas almost never use pass through mid to arch to B-site;
• As CT, Dignitas might be easily baited with some banana presence: hallzerk will shortly rotate from A to B in the mid-round.

Habits are habits, often you can't  aboid them without a special preparation and if you don't think about the specific detail.
As ingame-leader in CS:GO, you have to focus on a lot of things to do and to summarize all the information you have. But then, unwittingly, you choose a predictable decision.

If Dignitas play 3v4 or 4v5 situation on gun round, in 85% of cases they choose to execute A-site without apartments or with 1 player there.

If you know this habit, you can easily make the correct accent as defence.

Summarizing all the said above, obviously, Dignitas have a lot of work to do on their Inferno. But surely, we can forgive: they just need more time.

Let's track will the things change over the time or no ;) 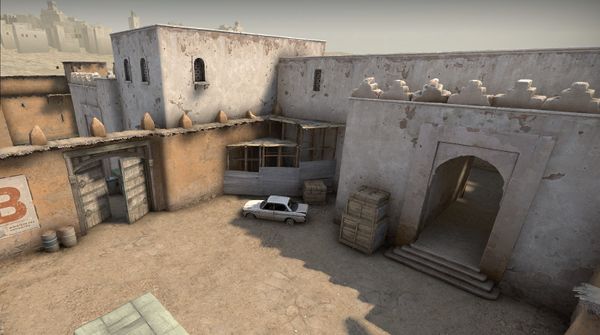 A long time ago many things were different. There were a lot of dragons and unicorns on the Earth, cats could talk and B-site skybox was closed. But one day